The Queen of Striptease

Dita Von Teese on her love of lingerie, burlesque’s big revival and what it’s like to be a sex symbol.

If a picture is worth a thousand words, then a photograph of burlesque queen Dita Von Teese speaks volumes.

Whether she’s writhing atop a carousel horse or swimming around a martini glass clad in little more than a G-string, pasties and a seductive smile, the raven-haired, alabaster- skinned nymphet captivates her audience.

In Las Vegas recently as a guest of Victoria’s Secret, which celebrated the one-year anniversary of its megastore at the Forum Shops at Caesars with a book-signing and performance by Von Teese—“A Very Sexy Weekend”—she signed autographs for fans and performed her signature act in
1OAK nightclub at the Mirage.

We caught up with the newlywed (she married shock rocker Marilyn Manson in December) in her suite at the Mirage the night before her performance, and talked about her love of lingerie, burlesque’s big revival and what it’s like to be a 21st-century sex symbol.

NA: So which of your many stage props will you be using for tomorrow night’s show?

DVT: It always comes back to that [martini] glass. It’s the winning formula—a wet, naked girl works for people no matter what.”

NA: Tell me about your book—Burlesque and the Art of the Teese. How did the project come about?

DVT: I wanted to write something about the history of burlesque—why I was so interested in it and why I stuck with it when everyone else said I shouldn’t. I’ve had my website since 1993, and now I have something like 25,000 pinup and fetish style photos, so it seemed like a good time to put together a collection for a book. The book features all of the best of those photos, plus the best fashion magazine photos that I’ve done.

NA: It was your love of vintage lingerie that led you to pose for these photographs. When did your fascination with lingerie begin?

DVT: I loved old movies, watching women like Rita Hayworth and Betty Grable getting dressed and undressed backstage before doing a show, because old movies were always about putting on a show. And I always thought of lingerie as this lacy, silky, satiny, beautiful thing. I never really equated it with seducing; I just wanted to wear it.

NA: Your first job was in a lingerie boutique.

DVT: Yeah, when I was 15. That’s when I started collecting lingerie. Then I decided I wanted a Victorian, steel-boned corset, but when I asked around no one knew where to get one. I finally had one made for me at a bondage shop in Orange County, Versatile Fashions. And then just having and wearing it wasn’t enough, I wanted to be photographed in my vintage lingerie. I started collecting vintage men’s magazines from the 1930s and ’40s with these beautiful images of Bettie Page tied up. I set out to bring back that imagery, because modern fetish magazines featured hardcore girls with shaved heads, tattoos and piercings. I decided I was going to be a famous fetish model, and I asked friends of mine who were fashion photographers to take very fashion-forward pictures of me.

NA: At last count you had 400 corsets. Do you have occasion to wear them all?

DVT: I haven’t counted in a long time. I probably have a lot more. Some of them I’ve worn once, some a hundred times. But they all mean something to me, because they remind me of a time or a place in my life. I store them in trunks in a room in my house decorated with pink velvet wallpaper and pink chandeliers.

”I decided I was going to be a Famous Fetish Model…”

NA: How did you make the leap to the stage?

DVT: I was a ballet dancer all of my life. When I was 18 I started working in LA’s rave scene as a go-go dancer and for fun a friend of mine took me to a bikini club. I saw it as another fun way to be seen in my lingerie. All of the girls were blond, tan bikini babes and I thought to myself, “This is a goldmine,” because I was the opposite of that. Where there’s a niche waiting to be filled that’s where you find success—not trying to be like everyone else.

NA: So burlesque performance was sort of a natural evolution?

DVT: The girls featured in the pinup magazines I collected were the burlesque performers of their day. So I decided I should have a stage show like they did, at first just featuring my vintage lingerie, then vintage music, then feather fans. Some people got it. Some people didn’t. But I had a special clientele who paid specifically to see a girl wearing garter belts, stockings, high heels and long black leather gloves.

NA: You started dancing in strip clubs in the early ’90s. How was your feather dance received then?

DVT: I got a lot of static over the years. In the beginning, when I had my Bettie Page hair, everyone called me Cleopatra, because they didn’t know who Bettie Page was. Of course that wouldn’t happen now. Plus, I wore so much clothing on stage— corsets, garters, stockings, gloves—everyone thought I must have had a terrible scar that I had to cover up. I was just really into dressing up. When I met my best friend, Catherine Delish, she started making all of my costumes, and we started making props together. It became our goal to create the biggest, most fabulous, most expensive burlesque shows that anyone had ever made.

NA: This burlesque revival began in the mid-1990s and more than 10 years later it seems to be more popular than ever. To what do you attribute burlesque’s triumphant return?

DVT: I think a lot of it has to do with the fact that the mainstream media has gotten so interested in it and that bigger names like Carmen Electra have been attached to it. But burlesque has been used to describe girls wearing a feather boa and fishnet tights in a pop group. Some “so-called” burlesque performers say that they are too “classy,” they would never take off their clothes. True burlesque means stripping down to pasties and a G-string. Are you telling me that Gypsy Rose Lee was not classy? Honey, that lady had more class than most of those girls. She drove a Rolls Royce and wore Charles James couture. She was a huge star—the Madonna of her time.

NA: Your act has been described as “more art than tart.” Has that always been the goal, even when you were playing seedier clubs rather than corporate events?

DVT: Burlesque is not just about girls in hot pants and fishnets, it’s about the theatrics, the performance, the striptease. I don’t just replicate the shows that were done in the old days. Burlesque can evolve, but it still has to have a few key elements to it. You have to peel the clothes off layer by layer. It has to put sex in your head.

NA: How did you manage to get on the cover of Playboy without forfeiting your signature style?

DVT: I tested to be in Playboy something like six times and I was rejected every time. It wasn’t until Hugh Hefner saw my show. He made the decision to put me on the cover, overriding everyone else. But it took a long time. I wasn’t an overnight success.

NA: You’ve been referred to as the “Sex Symbol of the Moment.” Do you consider yourself a sex symbol?

DVT: I’m happy that people look at me that way. If you think of the people who have been described as sex symbols throughout history, I’m happy to be included in that camp. It’s a good time for women of the world to realize we don’t have to all look like the girl on the cover of FHM. There are other versions of sexy, and it’s OK to create glamour and sexiness rather than just being born beautiful.

NA: What do you find sexy?

DVT: I find people who are unique or out-of-the-ordinary sexy. Women who have found their own personal style and what’s unique about them and use that. Extreme glamour is what
I find sexy.

NA: You’ve said that even when it was mostly men ogling you [70 percent of the registered fans on her website are women now] that you always felt you were the one that was winning because you were making a living doing something you love.

DVT: I always loved it and I didn’t ever care if it was commercially successful. When I was performing at strip clubs, I did it because I loved it. I think it’s important for people to remember to do what they like to do not just what they think will be successful. Until you have been [a stripper] it’s easy to think that those women are being degraded, and I am sure that some of them are, but I always felt completely powerful. I didn’t have to rely on anyone else. I’ve worked as a stripper since I was 18. And I have put money away that whole time. If you stop living day-to-day, you can really do something for yourself. 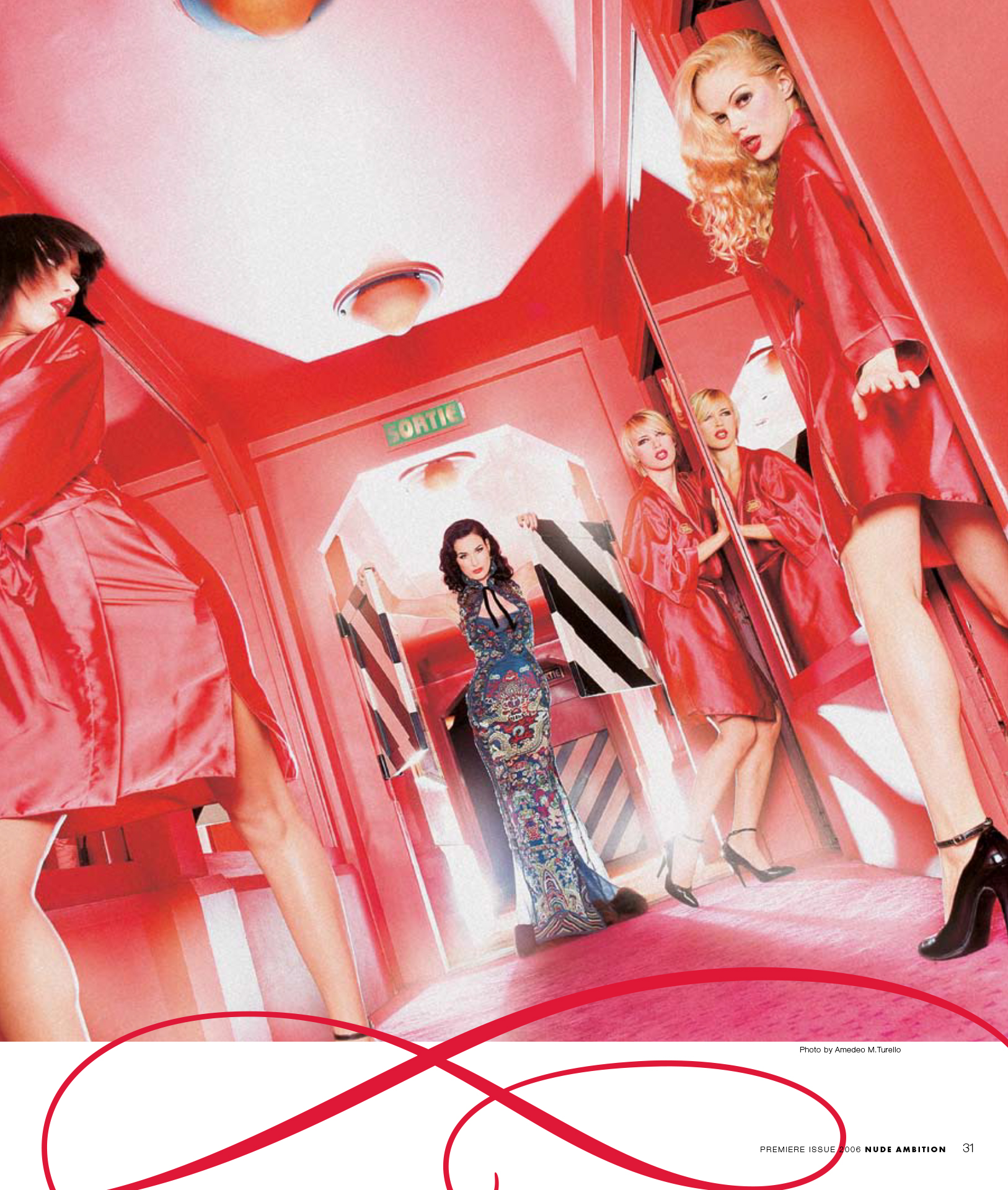 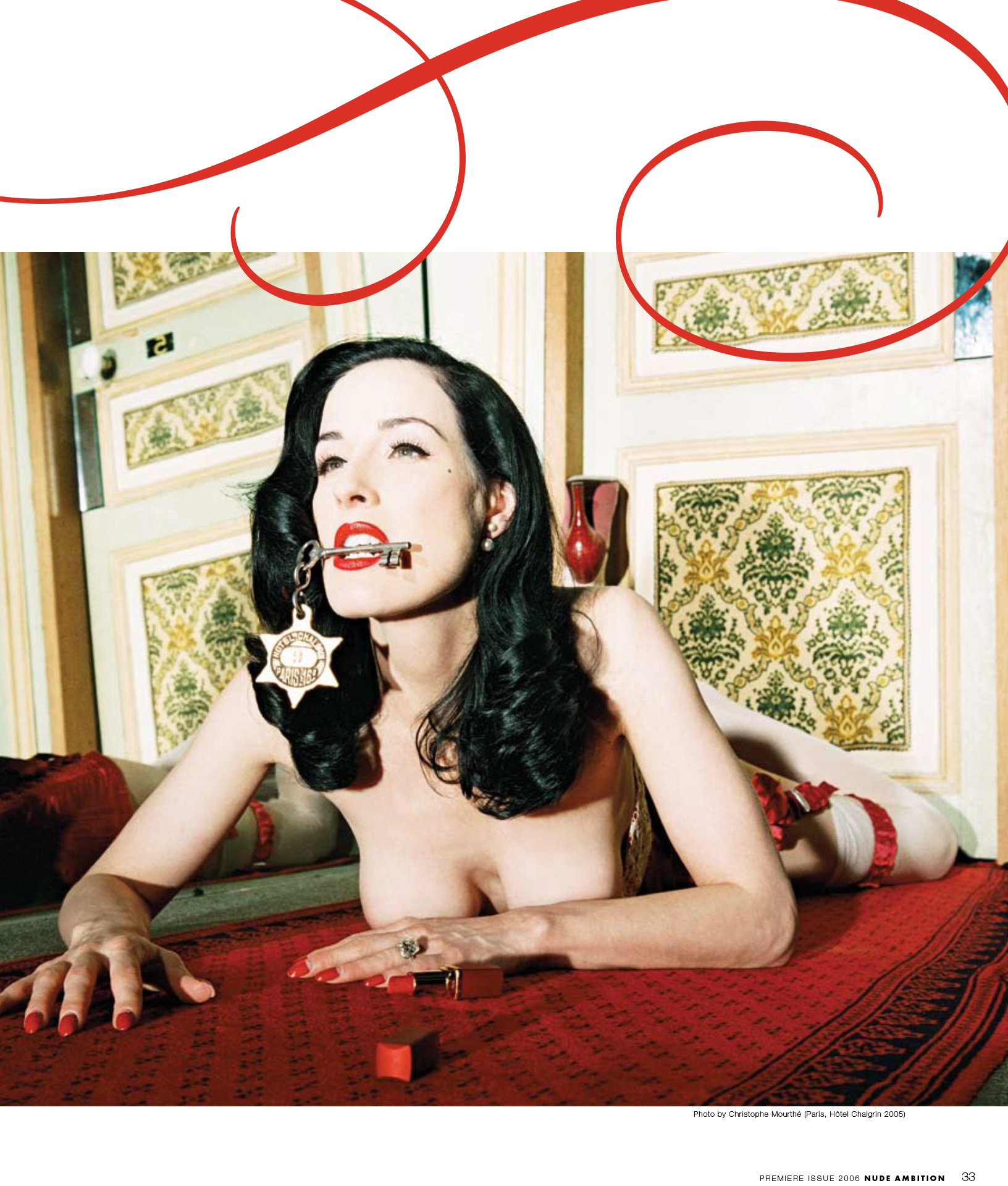 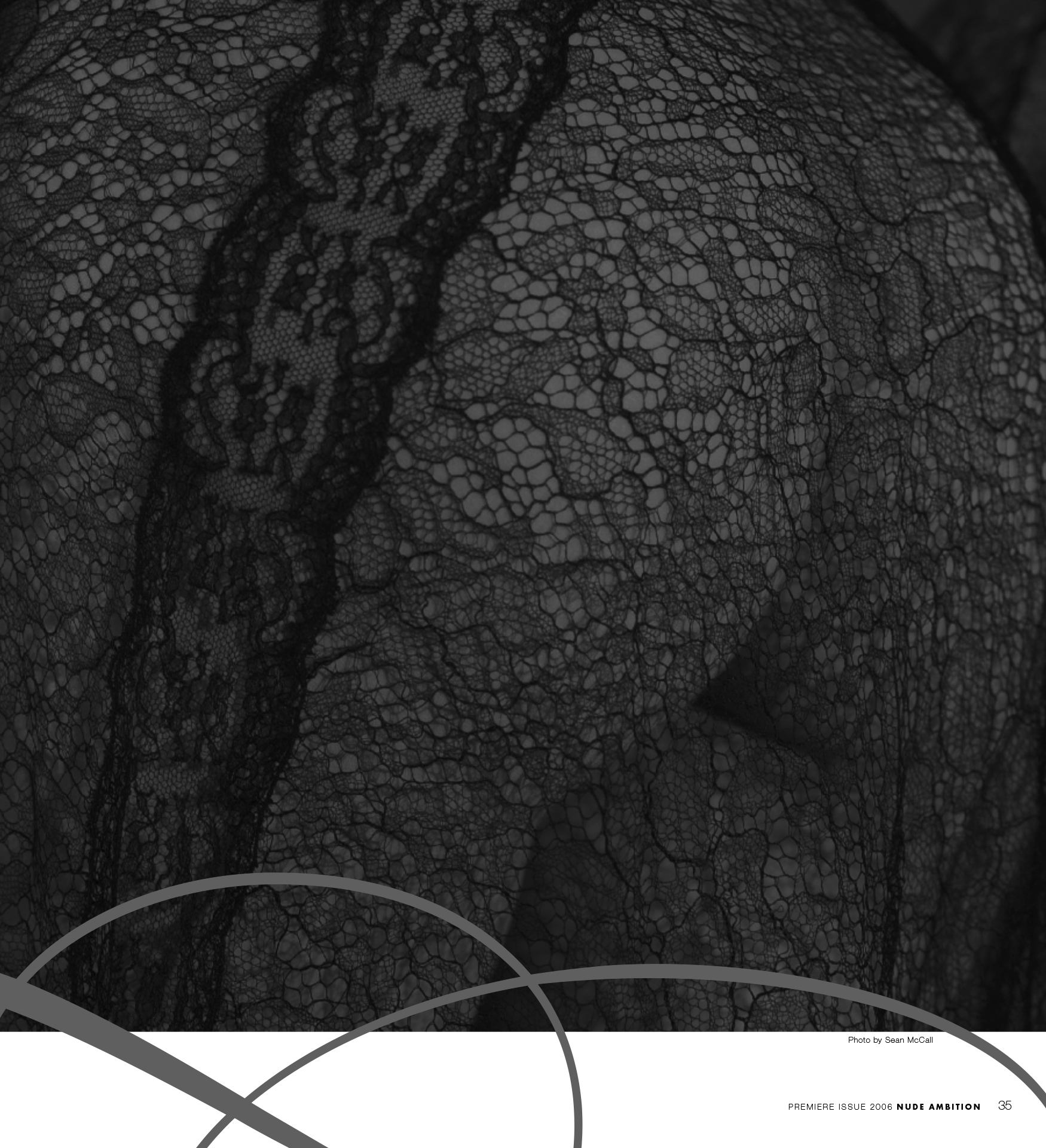