History of the Striptease

From a famous beheading in the’ Bible to a fly-away bikini at a World s Fair, the striptease has always been a part of world culture.

When the daughter of Herodias came in and danced, she pleased Herod and his dinner guests. The king said to the girl, “Ask me for anything you want, and I’ll give it to you.” And he promised her with an oath, “Whatever you ask I will give you, up to half my kingdom.” She went out and said to her mother, “What shall I ask for?” “The head of John the Baptist,” she answered. — Mark 6:22-24

Who was that masked woman?

Though unnamed in the Bible, she was Salome, and her number was the first striptease song of all time: “The Dance of the Seven Veils.”

Evidently the “Dance of the Seven Veils” was a big hit in ancient times. Salome picked it up from the Sumerian goddess of love and fertility, Inanna, who invented the routine for the ultimate spiritual journey: to the underworld. She abandons her powers and checks into the gates of hell wearing seven attributes of civilization (namely jewelry and possibly “veils”) and she strips off one of the adornments at each gate, saving the royal loincloth for last, until she finds herself naked before her sister, a.k.a. the queen of the underworld.

At first the effort appears to backfire: She’s killed and her corpse ends up on a hook. Then she makes the type of comeback that myths are made of, leaving hell on the condition that she finds a replacement. Well, that choice becomes easy when she gets back home to find her husband kicked back on his throne, totally oblivious to her absence let alone concerned that a few days ago she was rotting on a wall. But it turns out that Inanna misses that big lug and has him paroled for six months every year (for a scholarly look at the story and some lessons, visit halexandria.org/dward385.htm).

The Goddess of Stripping

Inanna started the tradition of having an alias for different gigs. She’s also known as Ninnanna, which means “queen of the sky,” and Ninsianna, for when she was personifying Venus. In Akkadia, several thousand years before the movie came out, she was known as Ishtar.

According to Encyclopedia Mythica, “Inanna is portrayed as a fickle person who first attracts men and then rejects them. She is depicted as a richly dressed goddess or as a naked woman.”

An ethnic group in Egypt known as the Ghawazee got a lot of ink in the 19th century, thanks mostly to French writer Gustav Flaubert, who became enamored of an exotic dancer known as Kuchuk Hanem. According to Wikipedia online, she performed “a dance step known as ‘the bee’ … with the dancer standing musing in a pensive posture until a buzzing insect flies into her clothing and she ‘flees’ in terror, dancing rapidly, and removing articles of clothing in the manner of a provocative striptease.”

Kuchuk was probably an early belly dancer, which, as that century wore on, greatly intrigued the western world, as did all things Oriental. The sort of American Idol moment for the exotic dance, though, was the 1893 World’s Fair in Chicago, which not only turned its millions of visitors on to the modern world, but introduced a dancer who called herself “Little Egypt.” In the “Street in Cairo” exhibit on the fair’s midway, she shocked and awed Victorian fairgoers with her exotic belly dance and revealing outfit. She’s prominently featured in a recent DVD about the 1893 World’s Fair, Expo, narrated by Gene Wilder, and a whole book was written about her mysterious tour of America, Looking for Little Egypt.

Our unnamed biblical stripper made a name for herself again, thanks to Oscar Wilde’s play Salome (1894) and Richard Strauss’s opera of the same name (1907). A craze began in American vaudeville, which, wrote Toni Bentley in a powells.com book review of Striptease, “unleashed hundreds of girls into American vaudeville sporting jeweled bikinis, transparent skirts, heads of John the Baptist, and those infamous seven veils—and thus was born the most undefined of dances, opening wide the field for experiment and exposure.”

In 1896, during the World’s Fair in Paris, there was an exhibit called “A French Woman Goes to Bed.” “It was just a show of a woman taking off all her stuff and getting into bed,” said historian Jessica Glasscock in a salon.com interview [with David Bowman] about her book, Striptease: From Gaslight
to Spotlight.

The first boob job was performed.

Due to the overpowering competition from other media, the time-honored type of entertainment known as Burlesque had lost a lot of steam by the 1920s, and some theater owners gave striptease a whirl. It worked, even through the Great Depression of the 1930s. Not that it was easy: “Strippers had to walk a fine line between titillation and propriety—going too far (let alone “all the way”) could land them in jail for corrupting public morals,” according to A History of the Musical, by John Kenrick. During this time, striptease acts went on tour, performing in venues that ranged from carnivals to Broadway. Many started wearing G-strings and pasties to stay “legal” yet be as nude as possible. Striptease basically took over Burlesque, Kenrick writes, and some of the more artistic women went on to stardom, such as fan dancer Sally Rand and the “comically intellectual” Gypsy Rose Lee.

Allegedly the use of trained animals became a new striptease genre thanks to the 1939 World’s Fair in New York, where Rosita Royce had “doves peel her,” according to a Variety columnist. Her act has also been described as “a fly-away bikini of trained pigeons.” Others say her birds of choice were a parrot and parakeet. You can see footage of her act at archive.org/movies.

The best time in history to have been a stripper? Possibly New Orleans in the 1940s and ’50s, judging from this excerpt from an article by Rick Delaup on frenchquarter.com: “The young beauties of Bourbon Street gained star status. They had their own hairstylists, maids, assistants, agents, and managers.
They mingled with visiting celebrities. Some exotic dancers were given small roles in films. Lily Christine the Cat Girl graced the cover of dozens of national magazines, and appeared in a few movies. Considered the top attraction on Bourbon Street, she performed at Leon Prima’s 500 Club. Musician Sam Butera, who worked with the Cat Girl, recalls her popularity: ‘One time they had a hurricane threatening. People were standing outside the 500 Club a block long waiting to get in. That’s how popular she was. With a hurricane warning!’”

“The young beauties of Bourbon Street gained star status. They had their own hairstylists, maids, assistants, agents, and managers.”

The striptease took a dive in the 1960s and ’70s, with the social conscience shifting. There was a comeback in the ’80s and ’90s, with the economic upswing and meandering social conscience. The number of strip clubs surged throughout America, no doubt thanks to Demi Moore’s movie Striptease and rock stars’ fetish for girls who take it off (and vice versa). Credit the Pussycat Dolls act in LA for the burlesque revival that started in the 1990s and continues to this day. And due to the music industry connection, strip clubs have gotten even stronger, and classier. 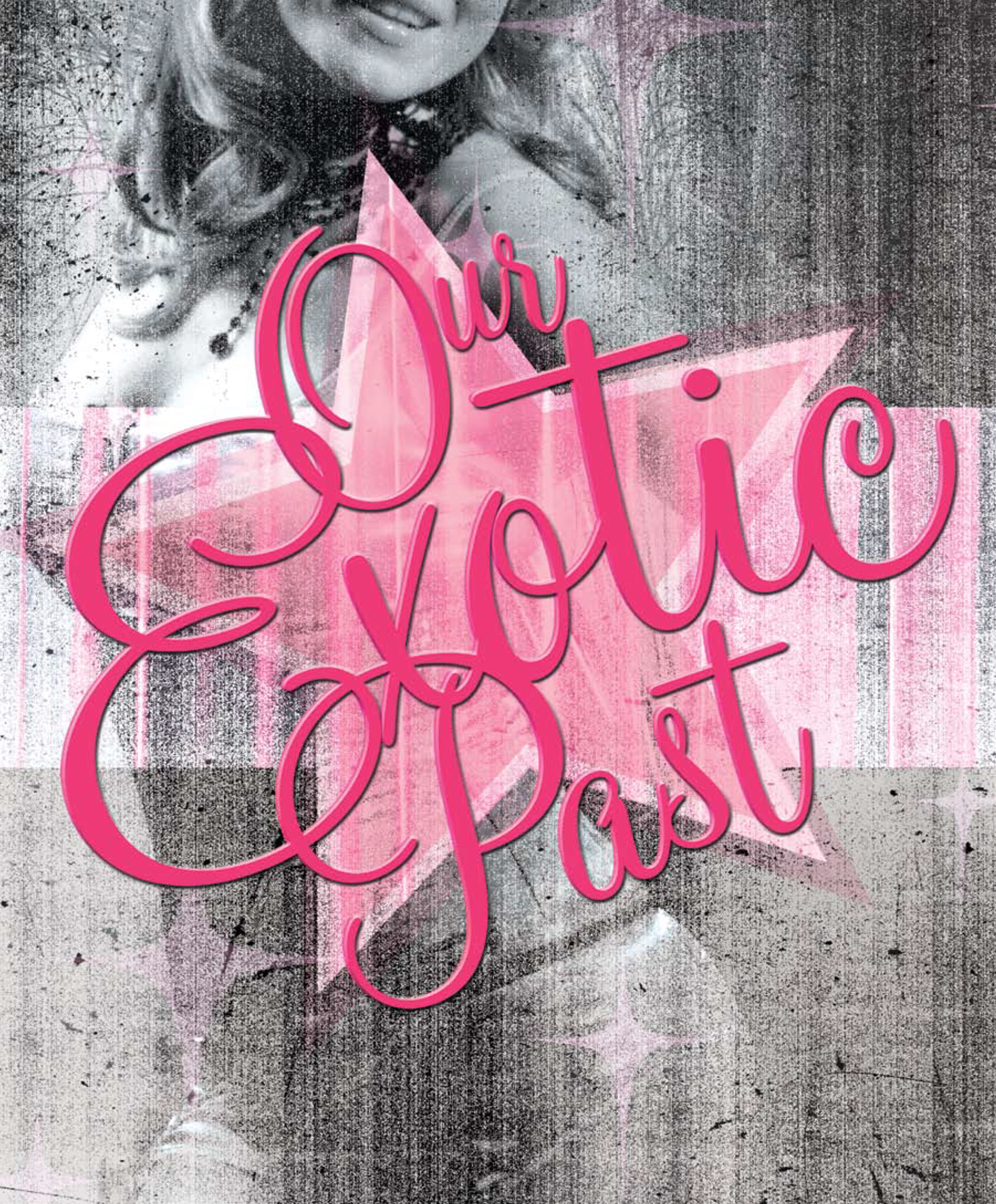 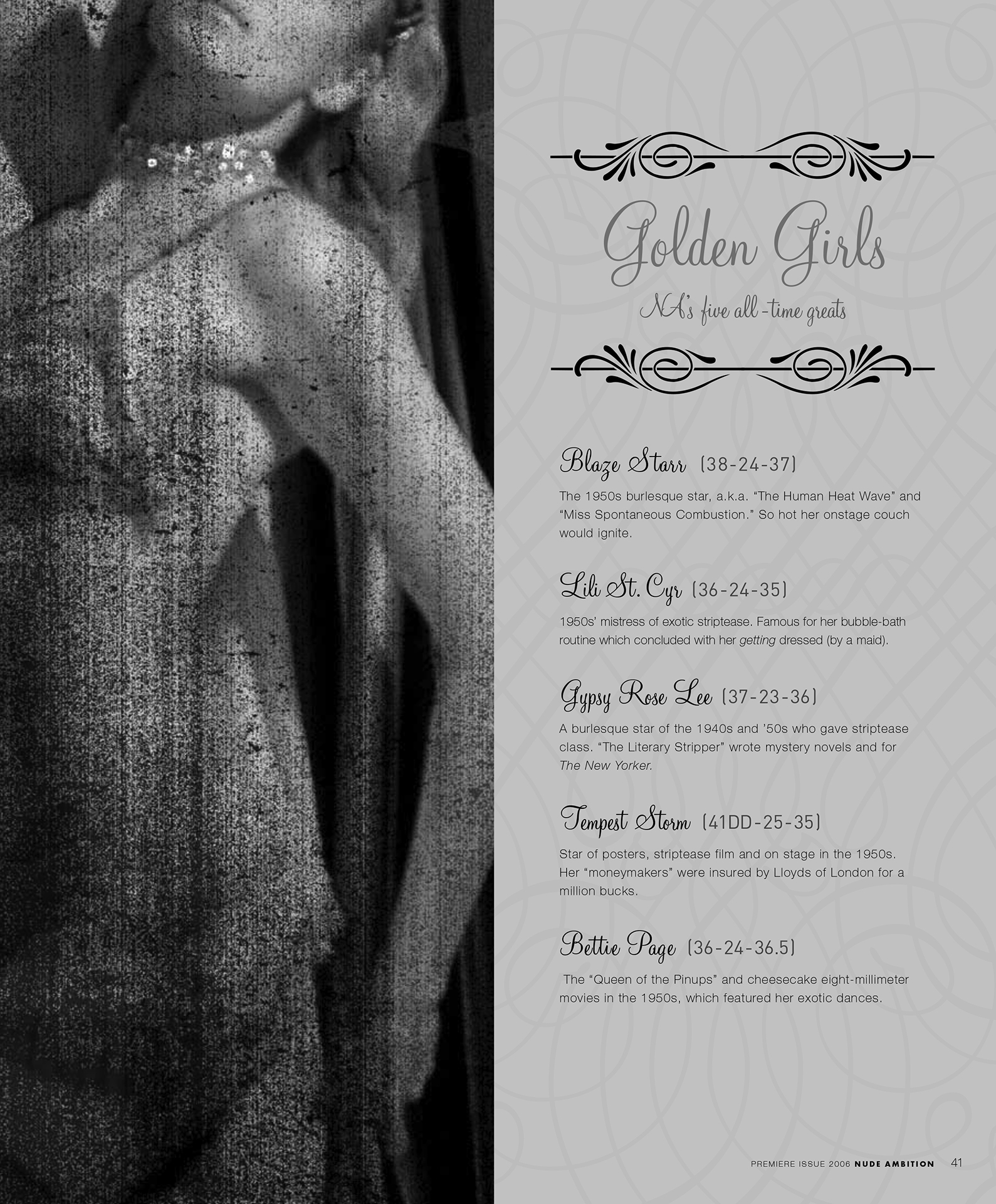 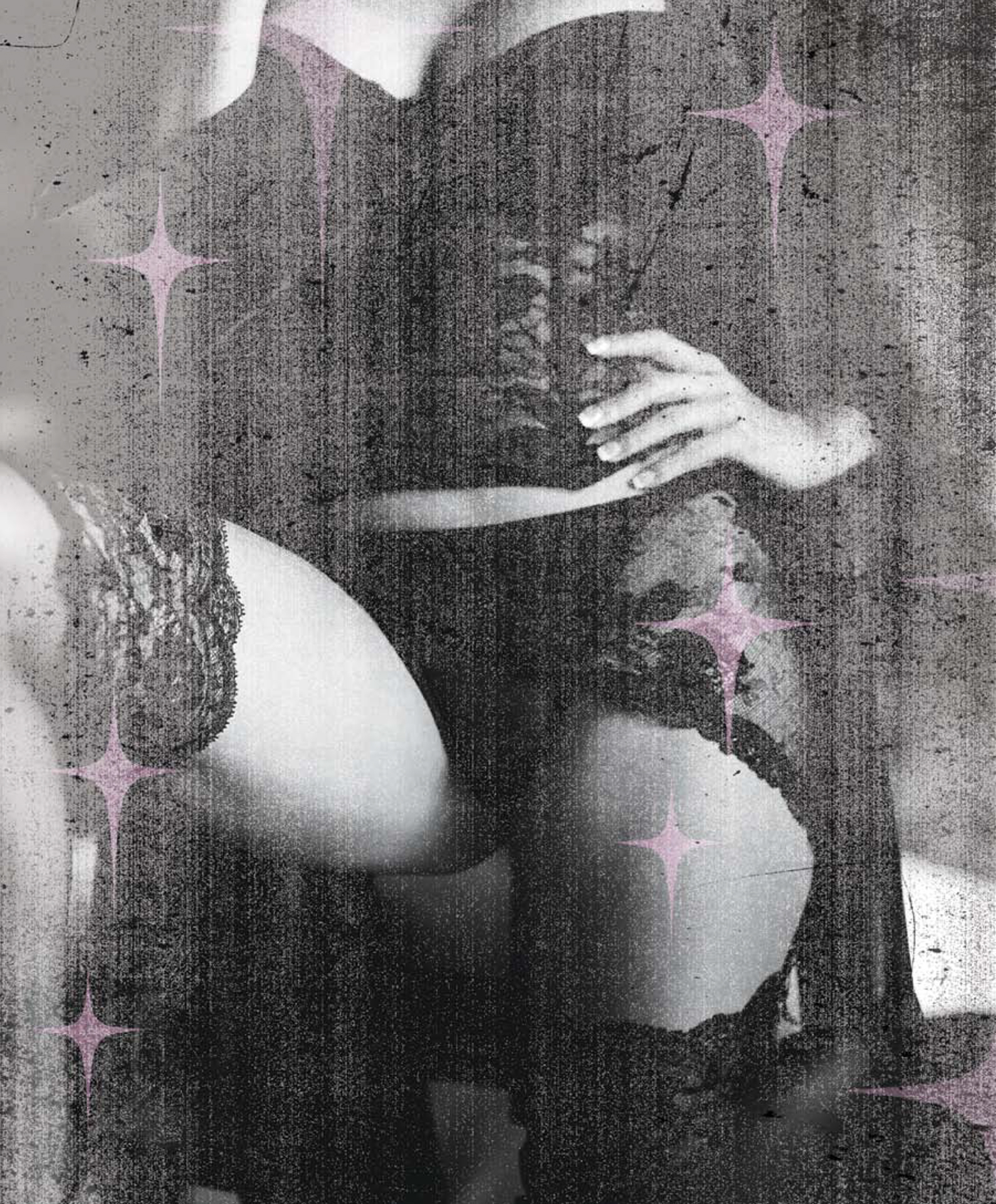