The History of Pole Dancing

One of the earliest recorded pole dancers was in Oregon, US in 1968, and following this, the pole dance craze is believed to have kicked off in Canada in the 1980’s. A woman named Fawnia Mondey initiated the first ever class in teaching pole to non-performers in 1994, and then created the world’s first pole dancing
school and produced various instructional videos.

Where and When did “Pole” Begin?

Modern dance pole dancing has evolved into exercise from practiced by not only professional and performers but by everyone from casual students and fitness enthusiasts to national and internationally recognized pole athletes. The world of Western Pole dates back a lot further then many would imagine. Pole
is practiced today by both women and men and is a fusion of Chinese pole, Indian Pole or ‘Mallakhamb’, other circus based (eg. Dutch and French pole) exotic dance of various international influences and pole dancing as seen in the travelling fairs of the American Depression.

Chinese pole is usually what comes to mind when thinking about the history of pole fitness and you would not be wrong. The history of ‘Chinese Pole’ dates back to prior to the 12th century, when professionals of the era would use a pole, approximately 3 – 9 meters in height, laced with a rubber material and wear fully body costumes.

Performances of the Chinese pole were less fluid than performances we now see using a pole, due to the grip from the pole and the costume, but many tricks like ‘the flag’ holding straight out at a 90 degree angle to the pole using nothing but arm strength, are still being used to this day. Chinese acrobats would display climbing, sliding down, stretching and holding positions using acute strength and skill. Performers of this time would regularly have burn marks on their shoulders from performing and training which became a way for
them to identify and have respect for one another within this art form.

With the flips and jumps, sometimes performed with two or more performers and poles there is much crossover to this day between these Chinese circus performances using pole and that of Cirque Du Soleil.
Indian Pole The Indians also have a ‘pole’ tradition of some form dating back to over 800 years and originating in Maharashtra. This form was referred to as “Pole Mallakhamb” and was intended as a way for wrestlers to train. Yes, wrestlers! The literal translation meaning ‘wrestler of pole’; “Malla” = ‘wrestler’ and “Khamb” = ‘of pole.’

The Indians would often play competitively, using a smooth wooden pole with a base diameter of 55cm and thinner diameter at the top of 35cm, which was sometimes laced with a castor oil to avoid friction. They would wear little clothing, taken from inspirations of yoga clothing or they would wear similar clothing to swear and no shoes to allow better skin to pole grip. They became pole flip specialists and would often begin a performance by running up and flipping directly on the pole. No easy feat by any means, as it required a great
deal of precision and agility. Pole Mallakhamb was used to develop speed, reflexes, concentration and co-
ordination. Training in this form helped to increase stamina, strength and endurance. It was believed that this type of training was beneficial in practicing many other games and sports such as Wrestling, Judo, Athletics, Horse-riding, and it improved flexibility, grace, swiftness and rhythm especially for gymnasts. Nowadays there are national Mallakhamb championships involving 14 states in India, and is a very male dominated environment in which women do not participate.

How do these forms compare to Pole as we now know it?

Pole as now evolved into a modern day exercise form, not just for professionals
and performance and not just for one sex. The world of western Pole dates
back a lot longer when you would imagine.

Pole Dance in the Olympics

An effort to include pole dancing in the Olympics was initiated by K.T. Coates. International Pole Dance Fitness Association (IPDFA) founder, Ania Przeplasko and Pole Fitness Studio (PFS) founder, Fawnia Mondey strongly supports this idea and both have in many interviews highlighted this cause. IPDFA and PFS seek to gain the International Olympic Committee’s recognition of pole dance as a sport. US Pole Sports Federation (USPSF) is the national federation and the US governing body for Pole Sports. It was founded in 2014
under the name US Pole Sports Federation, and is a non-profit 501c3 along with being a non-governmental national organization constituted under US law.

The US, Europe, Australia and Asia quickly followed, with pole dancing and pole fitness classes, studios, academics, competition and training spaces opening worldwide. So today, modern pole is a combination of these centuries’ old techniques, and has evolved into a modern day form that relies heavily on dance as well as fitness skills.

The fusion of the finely tuned circus performer skills and of the Chinese, and the energetic acrobatic skills of the Indians and the alluring and sensuous dance skills of the Western world, are what make up Pole dancing as we know it today.

Going forward, Pole Expo, founded by Fawnia Mondey, is joining with US Pole Sports Federation, president by Summer Vyne, in Las Vegas September 2018 to grow as a community and continue
making history.

Exotic dance, which is commonly incorporated in modern dance pole fitness, can be traced back to ancient times. Striptease has been known to date back to myths of ancient Sumerian times, where the goddess of love, Inanna, was said to have danced and removed one item of clothing or jewelry at each of the seven dates that she passed on her way to find her lover Damouz. There have been linkages of this myth evolving from the Bible’s ‘Dance of the Seven Veils.’

Other influences of exotic dance over the years are said to have derived from Parisian times, i.e. Moulin Rouge, the ancient Middle-Eastern art form of belly-dancing, and also from Latin inspired dances such as the Rumba and Tango.

Pole dancing itself has been said to originate from the travelling fairs during the American depression in the 1920’s, where a group of dancers were entertain crowds in tents using a lot hip movements and suggestive dancing.

They became known as the ‘Hoochi Coochi’ dancers and would dance with the
pole holding the tent in place.

One of the earliest recorded pole dancers was in Oregon, US in 1968, and following this, the pole dance craze is believed to have kicked off in Canada in the 1980’s. Our very own Fawnia Mondey initiated the first ever class in teaching pole to non-performers in 1994, and then created the world’s first pole dancing school and produced various instructional videos. 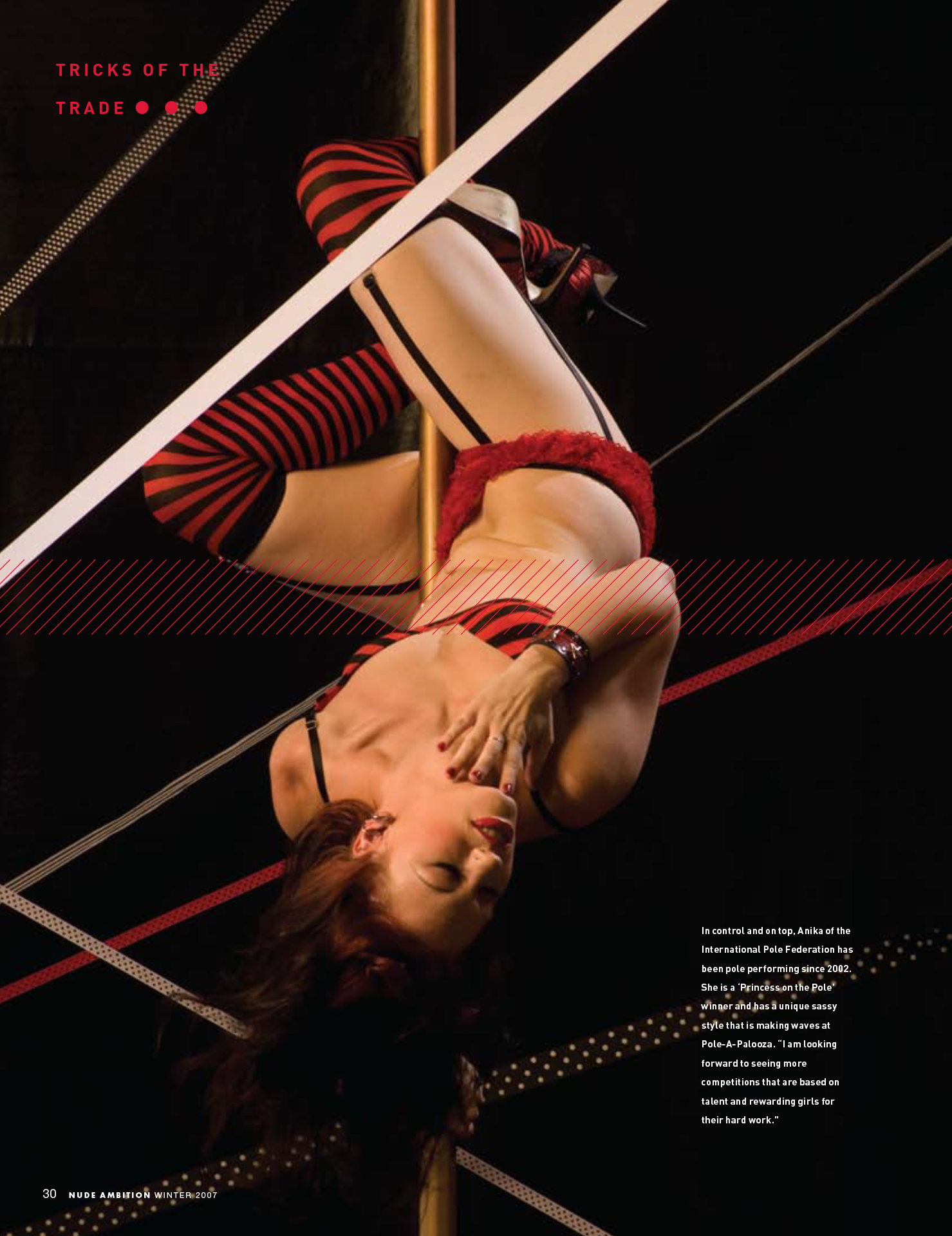